Goddess Fish Promotions - The Eye Of Ra by Ben Gartner

The Eye of Ra
by Ben Gartner 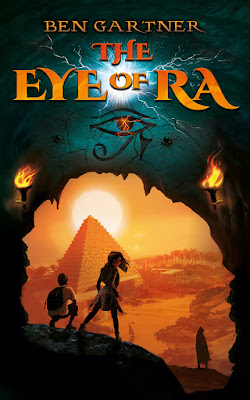 Exploring a mysterious cave in the mountains behind their house, John and his sister Sarah are shocked to discover they’ve time traveled to ancient Egypt!

Now they must work together to find a way back home from an ancient civilization of golden desert sand and a towering new pyramid, without parents to save them. The adventures abound—cobras, scorpions, a tomb robber, and more! The two kids have to trust each other, make friends who can help, and survive the challenges thrown at them . . . or be stuck in ancient Egypt forever.

For readers graduating from the Magic Treehouse series and ready for intense action, dive into this middle grade novel rich with meticulous historical detail.

As soon as her finger finished following the line of the eye, a bright flash illuminated the chamber for nothing more than the blip of a nanosecond, as if an electric bulb had exploded and gone out. John blinked back a sudden headache, wondering if he’d imagined the burst.

“Did you see that? So cool!” Sarah exclaimed.

John’s heart was in his throat. “Can we get outta here now?”

“So cool,” Sarah repeated, shaking her head. “I wish I had my phone to take a picture of this. Dad will love it!”

John tugged on Sarah’s shirt. “Can we please go now, Sarah? Please?” He could feel sweat on his forehead.

“Yes, fine,” Sarah said, pulling her arm away from his tugging. “This is a dead end, anyway. Let’s go.”

She marched off back to the corner and around it, John close behind. John could feel his chest loosening with every step, could almost taste the mountain air again. He plodded along behind her in the tunnel without looking up.

As soon as they were out of the cave, John smashed into the back of Sarah, who’d stopped suddenly.

“What the—” she muttered.

John didn’t smell the fresh mountain air. When he looked around his sister, expecting to see the scree slope and forest and the way back to the trail, instead he dropped his flashlight and his jaw at the same time.


A Word From The AUTHOR

To see the world through a child’s eyes is to see beyond the physical and imagine what could be. A playground slide becomes a waterfall off a cliff. A wagon becomes a rocket ship. A box becomes a portal to another world. I enjoyed the Calvin & Hobbes strip for exactly this reason. Calvin is a classic character and someone for whom my own middle grader has a bit of hero-worship. Heck, so do I! He’s Spaceman Spiff, a dinosaur, he travels through time with his best friend Hobbes, he even has a Transmogrifier that can turn him into…anything. That endless possibility is “why” middle grade.


However, that enormity of imagination doesn’t mean that kids can be easily fooled. In fact, they have a keen sense of character. But they are, typically, more open to fantastical possibilities than adults. For example, in soliciting beta reader feedback on THE EYE OF RA, I had several adults question the mechanism of time travel and the rules of this particular universe in regards to traveling through time (e.g. understanding the language the ancient Egyptians spoke). Yes, this came from a genuine curiosity which I respect and appreciate, but not a single one of the kids who reviewed it had such a question. I mean, adults try to put their own world-view and scientific understanding around how something like time travel might actually work. Whereas kids (and especially middle graders) are much more likely to accept it as a magical force that is un-explainable, so don’t get bogged down in the details about the how since that’s not the point of the story! Roll with it! It’s not so much a suspension of disbelief as it is more just a belief that things are possible outside of what we think we know. No limits. I love that.


Middle grade kids are also at a time of burgeoning possibilities where their own personality is forming more concretely than in any previous era of their lives. They are allowed to swing from one preference to another as they try out and test the world around them. The Walt Whitman quote comes to mind: “Do I contradict myself?Very well then I contradict myself,I am large, I contain multitudes.”


In many ways, I envy this time of life when you’re getting your sea legs on what it is to be human and the possibilities are endless.

Ben Gartner is the author of adventure books for middle graders and thrillers for adults. His writing for both audiences shares an ability to grab readers by their neurons for a thrilling ride, maybe even teaching them something in the meantime. Ben can be found living and writing near the mountains with his wife and two boys.

Will be available February 1, 2020 via Amazon and IngramSpark distributors.

Ben Gartner will be awarding a $30 Amazon or Barnes and Noble GC to a randomly drawn winner via rafflecopter during the tour.