Book Reviews for the Blue Unicorn's Journey To Osm by Jenna 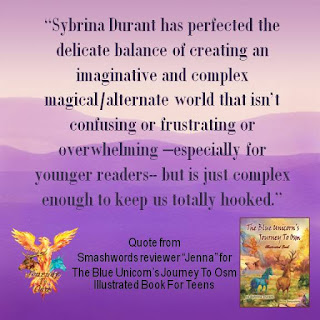 Jenna rated it it was amazing  ·  review of another edition


I will give this book 5 stars! “The Blue Unicorn’s Journey to Osm” a fun, enchanting story you just want to dive into and stay lost in! Unfortunately I finished it in two short nights, even though this book is surprisingly long… It’s been so long since I’ve read something with such magical, creative elements that didn’t feel super cliché or something I’ve read a dozen times before. So rare in this genre! … Sybrina Durant has perfected the delicate balance of creating an imaginative and complex magical/alternate world that isn’t confusing or frustrating or overwhelming –especially for younger readers-- but is just complex enough to keep us totally hooked! And I like how it is written in such a way that we see multiple character/unicorn POVs, as well as a narrator to show us the bigger picture. But Durant tackles some pretty heavy themes here and like that she doesn’t dumb it down for her younger audience (some really shocking moments and some sad ones as well). A great read, one I can see being in the libraries of junior highs… might skew a bit young for the High Schoolers but the story has enough substance to appeal to a mass audience. Recommend.
Posted by Sybrina at 7:00 AM No comments: