Book Reviews for the Blue Unicorn's Journey To Osm by Stacie E. 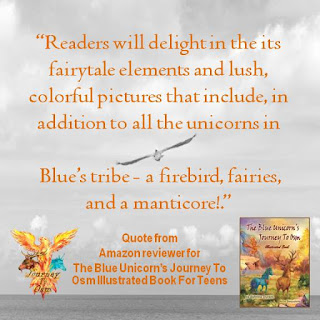 4.0 out of 5 starsCreative, Epic YA Fantasy for Fans of Unicorns & Fairytales
By Stacie Eirich

The Blue Unicorn’s Journey to Osm, by Sabrina Durant, is a gorgeously illustrated story about a unicorn born without magic but destined for great things. A tale that is filled with enchanting fantasy, it is also packed with action as Blue tries to help save his tribe from the evil sorcerer Magh. Readers will delight in the its fairytale elements and lush, colorful pictures that include, in addition to all the unicorns in Blue’s tribe - a firebird, fairies, and a manticore!

The addition of so many mythical creatures and Durant’s descriptive prose give this story a feeling reminiscent of Grimm’s tales. Written for young adults, it is a book that could be enjoyed by upper middle-grade readers and adults alike. Even though its pictures will no doubt draw in younger readers as well, the text does include some violence that may not be suitable for those under 12. While the book was nearly a five-star read for me, and I love that it celebrates the theme of friendship - the violence made it closer to four-stars because I don’t think my daughter (age 9, nearly 10) is mature enough for it, and therefore didn’t share it with her. However, Durant did intend a teenaged audience, which is appropriate.

Durant has also made a companion art book available, as well as a guide to the entire Unicorn tribe. Creative and visually stunning, The Blue Unicorn’s Journey to Osm is a book that is a must-have for unicorn fans, and a good read for young adults & adults who loves fairytales and beautiful, epic fantasy.

Want to read more reader reviews?  Read them here.  Want the book? Just click on one of the book icons on the left sidebar of this blog.

Posted by Sybrina at 1:00 AM No comments: Links to this post

Sybrina
Hi! I am the author of some technical and some fanciful books. I'd love for you to read them all. I also encourage other authors every chance I get by posting about their books and giveaways. Come here often to learn lots of new things.

The full length novel about Blue and the Metal-Horned Tribe.