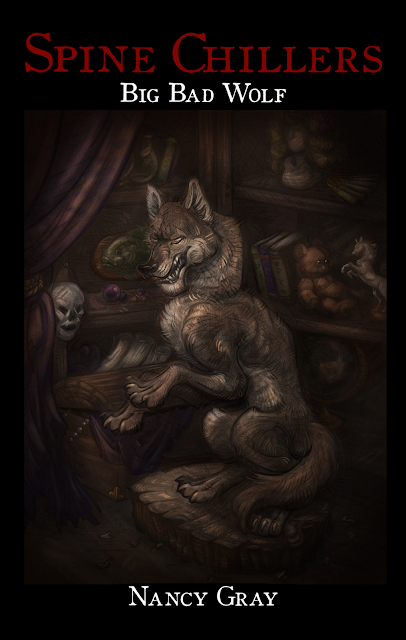 Jane is ecstatic when she gets the role of Red Riding Hood in her
school play, but she didn’t realize that they’d be using the stuffed
wolf prop as the Big Bad Wolf. That tattered old prop has always scared
her and, lately, she has been having strange dreams about it that make
it seem like it’s something more.


Jane will have to get help to save herself from the hungry spirit
that has haunted her people and her nightmares before it consumes her,
or worse, escapes the prison of the last creature it took to sate its
horrible appetite.


“I can’t believe it!  I got the part!” Jane hopped up and down as
she looked over the casting sheet one last time to make sure.


Her best friend, Sophie, laughed, “I
knew you would.”


“I didn’t think so.  I did awful at the audition.  I tripped over my own feet.”


“Mrs. Rose knew you were nervous
because you wanted it more than everyone else.
You deserve it.”


Jane sighed. “Are you sure that you
have to go on that trip?  I want you to
be here to at least see the play.”


Sophie shrugged. “I know.  But, it’s been awhile since I’ve seen my
cousin.  Besides, I like spending time on
the farm.”


Sophie smiled. “That’s good.  Then at least I’ll get to see it later.  It should be pretty scary.  Well, I’d better go and you’d better
too.  You don’t want to make a bad
impression being late on the first day.
Good luck, Red Riding Hood.”


Jane practically skipped to the
stage and lined up with the other students that were chosen for parts.  She glanced down the row and frowned.  Patrick was grinning at her with his squinty
green eyes and freckled face.


She snapped, “What are you so smug
about, Patsy?”


He chuckled. “Well, Janey Jane, Let
me guess, you were so excited you didn’t read the rest of the cast sheet,
right?”


Jane looked away, embarrassed.
“Well, I didn’t want to be late.”


He laughed harder. “I’m going to be
playing the wolf, Red.”


She ran a hand down her face and
murmered. “I knew it was too good to be true…”


Mrs. Rose walked up to the stage and
handed out the scripts to the row of excited students.  Everyone sat down and began to page through
their individual copies.  Patrick glanced
at Jane with an infuriating grin, but she simply rolled her eyes at him one
last time and then moved back to avoid looking in his direction again.


Mrs. Rose walked in front of them
and said, “First of all, congratulations on all of your parts.  Since this is a Halloween play, I chose the
rolls based on who could portray their parts in a suitably ominous way.  Remember, these are fractured fairy tales, so
nothing is supposed to end well.  And,
the common element in all of them will be the big, bad wolf.”


Patrick stood up and gave a quick
bow.


Mrs. Rose continued, “The main theme
is Little Red Riding Hood, but as you can see, there will be elements from
other stories incorporated.  While she’s
going to grandma’s house, she’ll run into Snow White being chased by the
woodsman, and themes from other stories as well, as she continues to get lost
further and further in the woods.”


A kid with round glasses and unruly
hair spoke up. “Can I play with different colors of lighting depending on the
fairy tale?  And can I use strobe
effects?”


“Well, probably no strobe
effects.  We wouldn’t want anyone in the
audience to have a seizure.  Still, I
think different colors according to the story would be excellent.  Everyone, this is Kyle.  He just joined the club as our lead
technician.”


A few people clapped, but Jane clapped a little
more than the others. “Thank goodness,
someone finally volunteered to be techie, instead of all the backstage work
being done by someone who didn’t get a part.
The lighting might actually be good this year.”


Kyle was in a few of her classes, but she never
really talked to him.  He didn’t seem the
type to be interested in the Drama Club.
He was always playing with his laptop or some kind of electronic
device.


Patrick whispered in her direction,
“I think someone’s in love.”


Jane whispered back, “Bite me,
Patsy.”

Mrs. Rose tapped her foot
impatiently. “Save it for the rehearsal, Patrick.”


They both muttered an apology and
quickly looked at the ground.


“As you know, we don’t have a good
budget this year, so I want all of you to look for old costumes and props that
we can reuse.  The basement under the
stage is a good place to start, as well as the various trunks backstage.  I believe, if we can get it working, the stuffed
wolf would make a great prop too.  There
should even be a speaker inside of it from our last play.  Kyle, see if you can reconnect it.”


“Jane, you go with Kyle and show him
the ropes.” 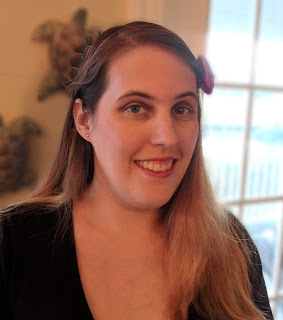 Nancy Gray has published a number of works including her middle grade series Spine Chillers. She also published her YA fantasy series Blood Rain. Her short story “Chosen” appeared in Jim Henson’s The Dark Crystal Author Quest: a Penguin Special from Grosset & Dunlap. Her work also appears in various anthologies.


Nancy Gray has been writing for over ten years. Gray lives in South
Carolina with her husband and two daughters. She enjoys books, video
games, anime, manga, and horror.

Posted by Sybrina at 2:00 AM No comments: